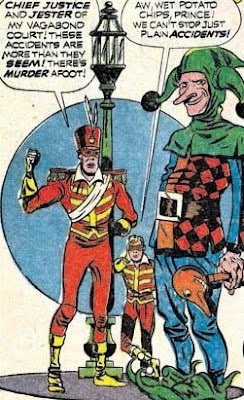 Blogger Will Shetterly has added a bit to the master-list of working-class superheroes I started a little while back (in 2005! holy smoke!) and the list now includes some more contemporary heroes I was not aware of way back when. Still, the paucity of actual poor or proletarian types who worked overtime in the long-underwear biz kind of proves my original point, that despite their origins in the sweat-shops of New York, superhero comics still had quite a bit of middle- and upper-class ideology embedded in their marrow.

I slightly updated my original list in 2006 and can't really think of any more Golden Age heroes to add besides Simon and Kirby's Vagabond Prince, aka Ned Oaks, a down-at-heels poet and writer of greeting card verses, perhaps modeled after the Gary Cooper character in Frank Capra's 1936 Mr. Deeds Goes to Town.

Of course, the real reason that we seem to have a hard time finding working-class heroes is because superhero comic books are all about rich people beating up poor people,* making the true heroes of the comics, from a class perspective, the villains. I wrote about this too, in a post about Solomon Grundy and "The Animated Corpse of the Working Class."

Maybe we could start a list of Working-Class Villains? The Wrecking Crew, Parasite, Sandman, and many of their cohorts were more prole than all the Reed Richards, Bruce Waynes and Tony Starks of the superhero-industrial complex combined. 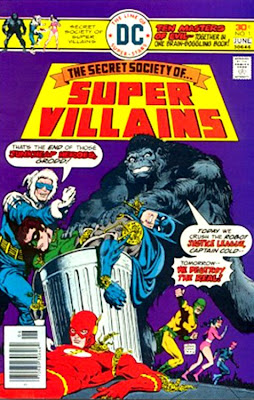 *The other major themes of superhero comics, besides class anxiety are identity, violence, and sexuality, in case you were interested.
Posted by BK at 1:05 PM

I keep wanting to add Ragman to the list:

But I haven't read any of his stories since the very first ones, and it sounds like he's not being handled as a working-class hero. But he could be.

Well, Chuck Taine didn't do too many deliveries after he started his Legion career as Bouncing Boy....