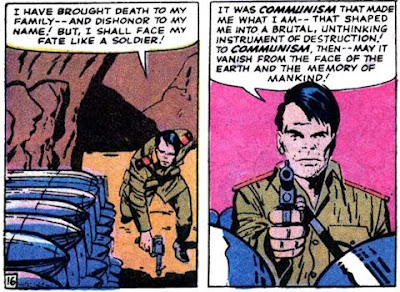 The funniest and most intellectually rigorous post about the Marvel Boycott this week comes from The Mindless Ones blog. Blogger "The Doubtful Guest" (aka "Joel") has posted a wonderful political-socio essay on the nature of the 1960s-70s Marvel Bullpen, collectivity, capitalism, and something called "Thrill-Power." Guaranteed to please, or at least temporarily entrance, those who may have a more critical or academic appreciation for Judge Dredd, Herb Trimpe, Marie Severin, and Jolly Jack.

"What I mean here is the concept of the Bullpen as something that entered the comics imagination with the 1960s Marvel Age, and continues to leave its historical trace in every comics Universe. The truncated history goes that, emerging from the Eisner & Iger independent sweatshop/studio, the Fordist assembly line and the 50s post-Comics Code audience exodus, the Bullpen formation was a way for publishers to ensure greater homogeneity and editorial control over their comics lines. In terms of Marvel’s history, it seems reasonable to suggest that the invocation of the Bullpen in the comics (through Stan’s columns, and the general tone of captions and narrative) as well as the real-life office was an attempt to keep that Stan & Jack/Stan & Steve Marvel Method Magic flowing beyond its original creative flush, and, of course, beyond the departures of the two artists. In actuality, it was also a way to ensure three things: vastly unequal profit shares (through those work-for-hire contracts Bissette mentions), a usually strict division of labour, and Marvel’s good old white male hegemony."

In other Boycott news, the cartoonist Frank Santoro (Storeyville, Cold Heat) joins the boycott in his Comics Journal column and Journal editor Tim Hodler has a great link from The New York Times about the efforts of famous musicians and pop stars to regain the copyrights of their old songs in the same way that the Kirby heirs are fighting for Kirby's copyrights.

"But hardly any artist in that end of the business was treated fairly in those days (much like in the music industry) and Kirby in particular deserved far more compensation — and RESPECT — than he received over the years from a royal procession of lawyers, asshole execs, and two-faced colleagues.

Anyone contesting that Marvel was largely built on Kirby’s ideas just doesn’t know their comics history."

Here's the reality of the Marvel Bullpen.
The early 60's bullpen didn't exist. It was Stan alone in a tiny cube; the movable office wall system closing in on him. Picture the tiny office in Brazil.

Larry Lieber: It was just an alcove, with one window, and Stan was doing all the corrections himself; he had no assistants. Later I think Flo [Steinberg, secretary] and Sol Brodsky [production manager] came in.

Dick Ayers: Things started to get really bad in 1958. One day when I went in Stan looked at me and said, "Gee whiz, my uncle goes by and he doesn't even say hello to me." He meant Martin Goodman. And he proceeds to tell me, "You know, it's like a sinking ship and we're the rats, and we've got to get off." When I told Stan I was going to work for the post office, he said, "Before you do that let me send you something that you"ll ink."


Jack Kirby: They were moving out the furniture.


Drew Friedman: My dad (Bruce Jay Freidman) actually worked at Magazine Management, which was the company that owned Marvel Comics in the fifties and sixties, so he knew Stan Lee pretty well. He knew him before the superhero revival in the early sixties, when Stan Lee had one office, one secretary and that was it. The story was that Martin Goodman who ran the company was trying to phase him out because the comics weren't selling too well.


Flo Steinberg: After a couple of interviews, I was sent to this publishing company called Magazine Management. There I met a fellow by the name of Stan Lee, who was looking for what they called then a gal Friday.... Stan had a one-man office on a huge floor of other offices, which housed the many parts of the magazine division.... Magazine Management published Marvel Comics as well as a lot of men's magazines, movie magazines, crossword puzzle books, romance magazines, confession magazines, detective magazines....

Romita: There was a huge bullpen when I worked there in the 50's. And this was even after he'd laid off a lot of people. Gene Colan, John Buscema, John Severin (who had all been on staff). They were gone by the time I got there.
When I went back (1965) there was no bullpen at all. There were only three people there Stan, Flo, and Sol.
When Flo was hired 1964 it had been only Stan with Sol working in the office part time as freelance production help.

Kirby: I had to make a living. I was a married man. I had a home. I had children. I had to make a living. That is the common pursuit of every man. It just happened that my living collided with the times. Circumstances forced me to do it. They forced me. There wasn't a sense of excitement. It was a horrible, morbid atmosphere. If you can find excitement in that kind of atmosphere it was the excitement of fear.

Patrick: you call that evidence? :)