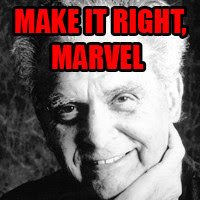 The first comes from Christopher Allen and his blog, Trouble With Comics. Chris writes that he and his partner won't be reviewing any Marvel product:

"I recently reviewed Marvel’s Thor Omnibus here on Trouble With Comics. That’s likely the last time you’ll find on this blog a review of a Marvel Comics product that stems from the original work created by Jack Kirby, unless Marvel Comics changes its corporate policies enough to do the right thing for the heirs of Kirby’s legacy. I’ve discussed this with my colleague Alan David Doane, and we agree that, even though we’re just one small part of the online comics discussion, we’re going to be true to our own values and not continue to endorse Marvel’s profoundly unethical treatment of the Kirby family."

The second post I thought worth mentioning is this one from cartoonist DJ Coffman, who proposes a few changes that Marvel could make that would signal the end of the boycott for him.

"Here’s are my suggested demands. Personally I would be happy with just ONE of the following happening:

* Now: A one time donation to the Kirby Estate of One Million Dollars, as simply a retroactive royalty for things in the past. 1 Million is a drop in the bucket, and a little insulting… but it would be a HUGE step forward.
* Forward: Give some sort of new royalty to the Kirby Estate that’s similar to the one given now to artists who draw so much as licensing art for a Toothbrush on Hulk. It’s only fair to toss a little back. If it’s not given to the Kirby Estate directly, make it go to charity of some kind on behalf of Kirby.
* At least CO-CREATED BY credit on anything Stan Lee has taken credit for creating."

Coffman also proposes, like Bissette, a creators strike. However, I think Allen's blogger strike has a greater likelihood of recruiting members than asking people to give up their livelihoods for a moral crusade, even for a short time (like one week).
Posted by BK at 11:02 AM