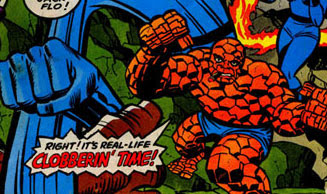 A couple good posts today from the blogosphere about the Marvel Boycott.

First up, Danish comics critic Matthias Wivel weighs in with some thoughts about why he is joining the boycott. (There is also a good discussion n the comments between Matthias and Patrick Ford about Stan Lee's deposition and the weird testimony he gave that led to the recent court decision.)

"It may seem utopian to get Marvel to change its ways, but its nearest competitor has made some progress on the issue, paying royalties to creators from films in which their characters or concepts appear. Their track record is far from perfect, but they’re doing a hell of a lot better than Marvel and its corporate overlords at Disney, who are raking in that box office moolah over assorted Kirby-derived superhero movies as we speak. And, as Tom Spurgeon has pointed out, Kirby’s collaborator at the inception of the Marvel Age in the early 60s, Stan Lee, won himself a lucrative deal with the publisher with just as little legal claim to his work for Marvel. Why can’t Marvel do something similar for Kirby’s family?

I think Bissette’s suggestion is worth taking seriously and have decided to join his boycott. I’ve been enjoying superhero comics from both Marvel, DC, and elsewhere for a number of years now and think there are a lot of talent in the business right now, and I shall be sorry to give up on some of my favorite creators, but thinking things through I just cannot bring myself further to support a company with policies as rotten as Marvel right now.

I went to my local comics store today, passed over the superhero comics I would usually consider and picked up the latest issue of The Jack Kirby Collector. It felt good. You should consider it."

The second post comes from Alec Burris, who writes an open letter to Marvel. Maybe we all should write letters!

"I implore you, as a fan and a reader of Marvel comics since the age of six, show us some of the heroics that grace the pages of your books. Until you do, those books -those heroes- will not line my shelves.

And I will miss these books. I will miss seeing Captain America during it's theatrical run. I will miss my monthly Amazon order of all the sweet premiere editions I have been buying since I switched from issues to trades. I will miss the upgraded Ultimate edition of Marvel VS Capcom 3. But all of these things will be waiting for me to come back to as soon as you take a stand and do the right thing."