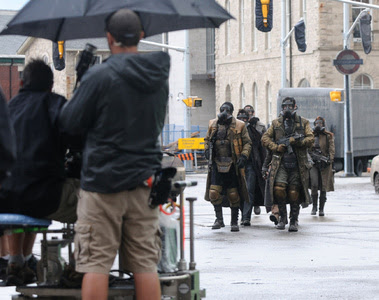 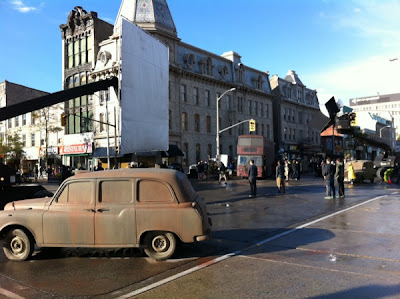 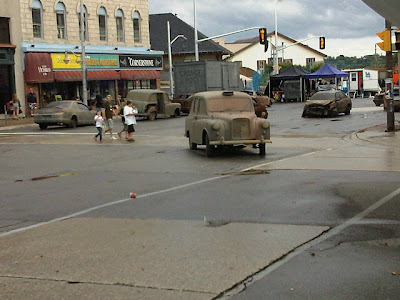 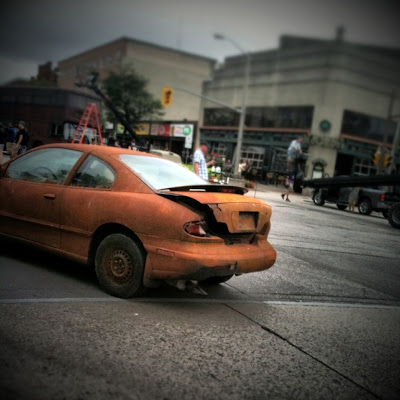 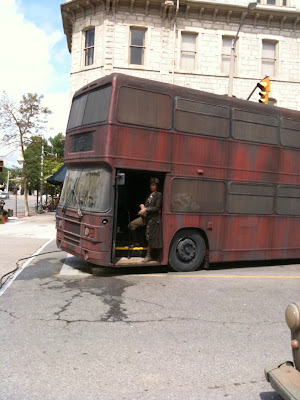 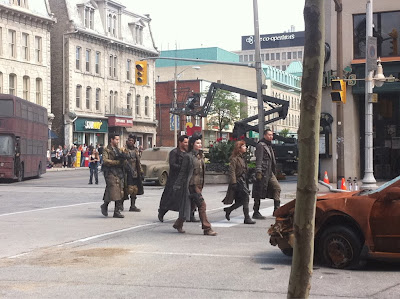 A crew from the upcoming Hollywood remake of Total Recall were in Guelph yesterday shooting a scene for the movie. Most of downtown was closed off while the film crew shot takes of actors walking across a street --pretty exciting, I know, but a fascinating window into the drudgery of big budget movie production. Despite several fierce rainstorms, it seemed like everyone in the city came downtown to check out the action and try to catch a glimpse of one of the stars. Although I heard from a restaurant owner who heard from someone involved that some of the leads were going to be in town (the film stars Colin Farrell, Ethan Hawke, Kate Beckinsdale, and Jessica Biel), apparently none of the mains were actually here. I certainly didn't see any celebs when I ambled down to who check out the goings-on. I did encounter a few crew members and one stunt double in my antique store late in the afternoon. Although none of them bought anything (boohoo!), the stunt double seriously considered a $2 purchase of a Guelph souvenir postcard.

I enjoyed the original Paul Verhoeven-directed Total Recall when I saw it in a theatre in 1990, despite the fact that Arnold Schwarzenegger was already starting to irritate my delicate teenage sensibilities. Since then, the movie has attained a sort of cheesy cult status but is still among the best of a generally lacklustre bunch of post-Blade Runner adaptations of Philip K. Dick stories. Total Recall was adapted from Dick's "We Can Remember It For You Wholesale".

From the Guelph Mercury:


GUELPH — Eric Repaci and his son Brandon picked the right day to try a downtown eatery for the first time.

The pair had a front-row seat as film crews moved wrecked cars into place and set up a scene from the Hollywood blockbuster Total Recall.

“It’s a unique experience in Guelph because we don’t see this kind of thing too often,” Repaci said as he and Brandon sipped coffee on the patio at Van Gogh’s Ear. “I’m a driver for Tim Horton’s so I get detoured around these things all the time in Toronto.

Alternating, and at times quite heavy, rain chased away some onlookers throughout the day.

But John Milne of Hamilton stuck it out most of the day, capturing some of the action – or lack thereof – on his cellphone camera.

Milne heard about the shooting and decided to come to Guelph to visit a friend and hang about the set for a while.

“It’s incredible the number of people and the amount of gear they need just to film a few people crossing the street,” he said.

Total Recall, set for release next summer, is an update of the 1990 Arnold Schwarzenegger sci-fi classic. It stars Colin Farrell as a factory worker who begins to think he’s a spy for competing nations in a post-Apocalyptic world.

To the disappointment of some onlookers, no major stars featured in the scene filmed here Sunday.

The action took place at the intersection of Macdonell and Wyndham streets, which was littered with wrecked and burned vehicles and decorated with street signs suggesting the film is set in Britain. A double-decker bus and several London taxis — painted to look like they were covered in dirt and ash — were among the props used in the filming.

Business owners near the intersection were paid to stay closed for the day, close early or simply keep their lights off.

At the nearby Apollo 11 family restaurant, co-owner Cathy Agelakos said business was down slightly because the street was closed, but added some of the film crew came in to eat in the morning.

“The workers are pretty nice,” Agelakos said. “Maybe this will bring some people downtown who wouldn’t normally come here and they will come back another time.”