Marvel Boycott Diary #11: "Jack Kirby is going to murder us all in our dreams." 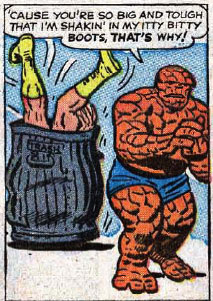 All the latest news about the Marvel Boycott.

In his latest Comics Journal column, cartoonist Frank Santoro has a few more words about the Marvel Boycott, including the news that he will no longer work for Marvel Comics. It's definitely the recommended read of the week, maybe the whole month. Plus, you get a Michael DeForge comic, Frank's thoughts on popular music, and a discussion of Klaus Janson as a colourist as a bonus. I won't excerpt Frank's comments here because they're fairly short, not to mention wonderfully profane. Go read it!


Also worth reading: Last week Rich Johnson interviewed the publisher of Image Comics, Eric Stephenson, at the Bleeding Cool website. Of course, whatever Stephenson says should be taken with a grain of salt since his company is in direct competition with Marvel and would potentially benefit from a large-scale boycott, but for the record, here is part of their exchange on the subject of Jack Kirby:

"Rich: You’re not publishing Kirby these days, the case doesn’t have an impact on any of Image’s contracts, people seem aware of what they are signing at Marvel and DC these days… are you joining the Steve Bissette boycott? How do you feel about Image creators who work on Kirby characters that pay the Kirby estate nothing?

Eric: Well, we’re not actively publishing Jack’s work, but one of his creator-owned properties, Silver Star, remains in print here at Image, and Image published a project he was involved with, Phantom Force, back in the early ’90s. Jack was an inspiration to every single one of Image’s founders, and with Phantom Force, that was Image’s chance to kind of say thanks, and for all that project’s flaws, it still made an incredible amount of money for Jack and his family.

But I can’t fault Image creators for working on Kirby characters when nothing is being paid to the Kirby Estate, because I’m guilty of that myself. I can’t really say, “Hey, I worked on those characters when I was younger, but I think you’re a bad person for doing that,” now, can I? Above and beyond that, though, it’s not really my place or Image’s place to tell creators what to do or what not to do with their careers. People have enough going on in their lives without some prick browbeating them over the phone and telling them what they can and can’t write or draw for other publishers.

The Bissette thing – I commend what he’s doing, because I think there’s real value in people coming together to make a stand. I’ve read these comments online where people say he’s naive or whatever, but you know, a lot has been achieved throughout the history of the world by people joining together as one and making their voice known. That’s exactly how democracy is supposed to work, and it’s the apathetic majority, cynically folding their arms and castigating everyone else for actually having principles that prevent it from working. As far as venting his anger and frustration over a wrong that should have been righted by now goes, I totally respect what Steve is doing. Why is his position any less valid than all those people who petitioned to save Spider-Girl, or whatever? I personally think demanding some respect for Jack Kirby’s legacy is a far more worthy cause."

And remember, no matter where you go and what you do today, please consider Boycotting Marvel!