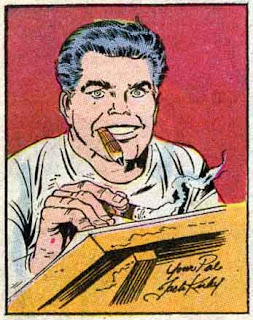 So I decided to boycott all Kirby derived Marvel Comics product, including reprints, video games and movies. Since Kirby is responsible for about 80% of the recognizable Marvel characters (and other creators who have not been recognized, like Steve Ditko, created the rest), that basically means I'm not buying anything Marvel does. Not even a Benjamin Marra USAgent miniseries since USAgent is basically a Captain America rip-off, I think partly designed to get around any future legal issues involving Cap.

Anyways, the basic impetus of this decision was Steve Bissette's call for a boycott, which I endorsed on Sequential, the Canadian comics news site I contribute to. As I said there, I think this is a moral issue and Marvel needs to imitate some of the superheroes it publishes and do the right thing.

I'd be happy to give Marvel money again if one of these 3 requirements happens:

1. Marvel acknowledges Kirby as the creator or co-creator of the relevant characters and titles, giving him credit with each publication, film or other product.

3. The Kirby heirs win the copyrights to the characters Jack Kirby created while at Marvel.

As for the reasons behind the boycott and arguments against, you could do worse than read Tom Spurgeon lambasting some naysayers over at the Robot6 blog:

Whether or not Kirby’s family has a legal right to share in the billions of dollars generated by these characters is what’s being decided in court through this case and the appeals process that will follow. What people are arguing today is the moral right that Kirby — and since Kirby’s not here his family — has to a modest share in the rich rewards roughly eqal to two or three years of bonuses received by a bunch of goofy-ass lawyers privileged in life to sit on boards designed to lift money away from creators and into their pockets, people that have as much to do with the creation of these wonderful characters as you or I did.

No one on planet earth older than twelve years old is comparing Lee and Kirby these days as some serious point of contention. It’s possible to love Stan and Jack. One’s awesomeness does not diminish the other’s. Lee did a ton of things super-well; Marvel would not have been possible without him for about a dozen reasons, from the script and idea work he did to a lot of unappreciated things, like his ability to communicate to artists he had exactly what he wanted in terms of dynamic art.

(And although I’m a fan of Lee’s work, I have to say that pointing out he did great work with Steve Ditko, Wally Wood and Bill Everett is hardly a slam dunk as to his stand-alone talent as those guys are all-time pantheon-level mainstream comics makers. I don’t think Lee needs to be a great stand-alone talent, though.)

The point is, though, that Stan Lee did receive — after regrettably having to sue — a level of reasonable compensation for his many and awesome contributions. (He deserves more, but still.) Why can’t the Kirby estate get a Lee-sized settlement? Why would this be such a bad thing? Why would this need to be wrung from Marvel in a court decision? DC manages to pay people for use of their characters in movies while Marvel blows this off — DC hasn’t collapsed because of this. Maybe there’s no legal reason to do it, but it seems there’s a hugely obvious moral reason. It’s the right thing for them to do. Since Marvel traffics in morality, why can’t they be moral here? Why is it “With great power comes great responsibility” in the comics and “With great power comes great responsibility to the shareholders and fuck everybody else” in real life?

I know that people say “that’s the way corporations are” but that’s just a horrendously debased and depressing way to look at life. Plus it’s historically inaccurate. All the big comics companies have changed policies for the better over the years, and stopped doing things that could certainly be defended as “that’s what companies do.” Why not change this set of policies, too?