Marvel Boycott Diary #12: "No Marvel as we know it without Jack Kirby" 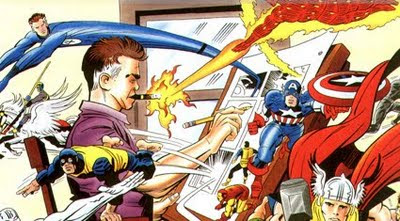 News from the Boycott Marvel frontlines.

A wonderful letter from J.T. Dockery on the Captain America movie and Jack Kirby's legacy:

In all the marketing and advertising and big money deals that have put this film based on comic books on the screen for distraction of the masses and money in the pockets of Marvel/Disney, what has been much less publicized is the recent legal decision that sided with Marvel against the family of Jack Kirby (Kirby is no longer with us on this mortal coil), essentially screwing him again, even in death, out of any revenue generated by characters he had a hand in creating. Legally speaking, he may have been doing his job under a work-for-hire basis but, frankly, I’m not a lawyer and I’m not interested in legalities; I’m interested in fairness.

Elsewhere, in the wonderful land of Twitter, a light-hearted exchange stemming from the recent Grant Morrison Rolling Stone interview took place between Robin McConnell (of Inkstuds podcast fame) and cartoonist Dustin Harbin (who besides his own self-published comics does some lettering for Marvel). The exchange is worth noting because it sums up some of the issues the boycott has been raising recently. I've excerpted part of their comments below, apologies if I mixed up the order of the tweets since I had to do some cut and past stuff to make everything readable:

Inkstuds: Interview with Morrison today is a reminder of how irrelevant mainstream comics have become. if marvel and dc disappeared comics would be better for it.
Harbin: You mean comics would be better if the two biggest employers, Diamond, and most comics shops went out of business?
Inkstuds: The artistic depths of a comic by Chris Ware is beyond anything DC has done in 20 years. On that note of dc, i read Batwoman today. amazing art. story was total shite. They even include the script so you can see how much JH3 improves what he has to work with.
Harbin: I think we agree on a lot of it! But things are too complicated for "Marvel and DC just disappear." For instance, a market that can support an annual Los Bros collection wouldn't exist without "big" comics companies. For good or ill, the furnace of the comics industry runs on big dumb comics Speaking as a former store manager. The big books pay for the ability to carry smaller press books, minis, etc
Inkstuds: not getting into this debate with you kind sir. we have very different POVs on the system. the whole thing is a mess.
Harbin: Boooo Robin. Where are your nuts?
Inkstuds: hhahaha, let me get drunk first! At some place that allows for more constructive debate than can come across 140 characters. A discussion better had with a bunch of bottles and no one listening and retweeting.
The debate is not just sales, but art, treatment of artists, moral and ethical expectations.
Harbin: Sure I guess. Go ask around about page rates at the prestigious small press companies if you're worried about ethics. Sorry dude it's bedtime on the East Coast--now Twitter will only remember your simplistic offense on Chris Ware's behalf!
Inkstuds: Who said offensive?
Harbin: I was replying to you saying simplistic offense.
Inkstuds: I dont think its an offensive comment to remark on a large corporate entity.
Harbin: Oh--I meant your offense in terms of you worrying about mispeaking publicly.
Inkstuds: Ok then, we can just hug it out.
Harbin: Yes and afterwards I'll buy you a beer. I'll have to cash my Marvel Comics check first, since that's my biggest reliable income.

My feeling is the smaller comic book companies (Fantagraphics, D&Q...)as well as the large book publishers who publish comics (Norton, Abrams, Pantheon...), don't need Marvel, DC, or the direct market. I think they would be just fine without the direct market, and I think we're going to find out, because in the not to distant future there aren't going to be enough comic book shops left to make the direct market viable.

pyratehttp://blog.newsarama.com/2011/08/24/the-new-boycott-comic-action-comics/
Tell me Bryan,
you will support this move,won't you?

http://blog.newsarama.com/2011/08/24/the-new-boycott-comic-action-comics/
Tell me Bryan,
you will support this move,won't you?

I'm happy to seeRand Hoppe at the Kirby Museum has endorsed the idea of the boycott, and will be taking a more active role in promoting the true nature of Kirby's contributions to the Silver Age comic book stories he created for Marvel.
A very fine appreciation of Kirby's talents has been posted by JKQ editor Christine Harper at her blog.
http://www.chezchrissie.co.uk/journal/?p=1535

Thanks everyone for the links!