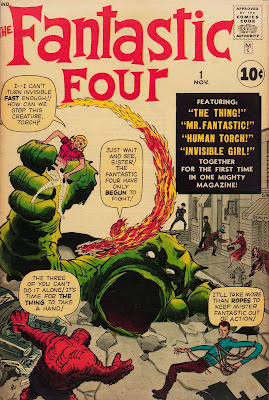 How propitious that the Marvel Boycott begins with the 5oth anniversary of the publication of the Fantastic Four comic book, the Jack Kirby creation that revived Marvel Comics and began Kirby's run of incredible characters and stories that are still being exploited by the company today without any credit or compensation being given to Kirby or his children.

The Kirby Museum reminds us of the anniversary here, and Tom Spurgeon has some comments here.

The Kirby museum also has some recommendations of Kirby-related comics you can buy if you don't want to support Marvel, as does this blogger who is not participating in the boycott, mainly because of the perceived effect on retailers:

"As sad as the situation is the LCS [Local Comic Shop] should not pay for Jack’s adult decision 30+ years later. I was told the LCS’s would survive selling indie titles in place of the Marvel book, and I pointed out that indies do not have the same mainstream appeal and would not fill the 60% income gap that Marvel represents every week for these stores. Now I could be wrong, but cutting off a income stream is hard on any business. At this point I was told I didn’t know anything, and my LCS was worthless compared to this persons LCS which sells nothing but indie titles (something smells like a bull in that statement)."

The idea of a boycott is to put pressure on Marvel through local retailers, but that doesn't mean those who are participating have to drop comics altogether. As Bissette mentioned in the manifesto that started all this, just put the money you would usually spend on Marvel product into something else, while letting your retailer know what's up. This doesn't mean don't pay for things you've already agreed to pay for.

(At least Shawn Hopkins at the Toonzone blog has some positive suggestions --like writing letters-- to counter his objections to an actual boycott.)

I didn't think anyone would notice my little blog about not participating in the Kirby Marvel Boycott.

Simply it is madness and will negatively effect your LCS, what I recommend, which you fail to note in your blog is to write letters, send nuts and do what Batgirl did at SDCC, at every Marvel panel.

Your right Nick, sorry about that. Thanks for pointing out the letter writing option as well!