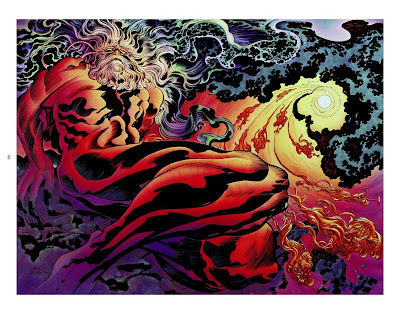 
The latest on the ongoing reaction to the Marvel Boycott.

Over at The Comics Journal, cartoonist and comics critic Frank Santoro joins the boycott and announces his new backissue sale.

On the opposite side, in a FAX-based interview with Straw-Man creator David Brainstetter, self-publisher and Biblical scholar Dave Sim (Cerebus, Glamourpuss) skirts the issue of Marvel and Disney's moral obligation to do right by Kirby in favour of more armchair legal analysis:

"Even if you leave aside jurisprudence and seek Overview in True Justice, I think you have to look at the pattern of behaviour. Jack Kirby was always a freelancer by choice. Even when Joe Simon pitched him on publishing Young Romance themselves, his choice was to take it to a publisher, thus costing them a lot of money they could have been making. [...] What was Kirby's pattern regarding his other creations? Did he actively seek to regain ownership of characters whose trademark and copyright had lapsed or did he allow them to fall into the public domain?"


Of course, Sim seems to be ignoring the major issue: wouldn't it would be "True Justice" if Marvel acknowledged Kirby's role as creator and co-creator of their major characters and compensated the Kirby family? (Whatever happened to a little "The LORD rewarded me according to my righteousness; according to the cleanness of my hands hath he recompensed me"?)

Meanwhile, the man who started the whole boycott, Steve Bissette, continues to chronicle the Kirby case with a couple of blog posts on Kirby's value and the nature of co-creation, with plenty of reference to Bissette's own experience with Alan Moore and Steve Ditko's working relationship with Stan Lee on Amazing Spider-Man. Lots of great facts dug up in the comments, including a real gem courtesy of Patrick Ford quoting Steve Ditko’s letter to Comic Book Marketplace magazine published in issue #63:

"In your Comic Book Marketplace #61, July 1998. page 45, Stan Lee talks about “…a very famous scene…” of a trapped Spider-Man lifting heavy machinery over his head. The drama of that sequence was first commented on and popularized by Gil Kane. Stan says “I just mentioned the idea…I hadn’t thought of devoting that many pages to it…” I was publicly credited as the plotter only starting with issue #26. The lifting sequence is in issue #33. The fact is we had no story or idea discussion about Spider-Man books even before issue #26 up to when I left the book. Stan never knew what was in my plotted stories until I took in the penciled story, the cover, my script and Sol Brodsky took the material from me and took it all into Stan’s office, so I had to leave without seeing or talking to Stan.
Steve Ditko, New York"