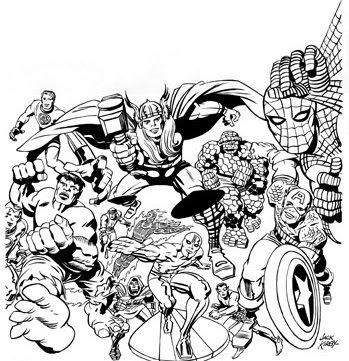 The big news today is that the Jack Kirby family filed their appeal in the case against Marvel for the copyrights to the superhero characters Kirby created. So the court case isn't over and there is still time to get on board this protest against Marvel and Disney.

Everyday I hear from a few more people who are joining the boycott. Yesterday I received a comment via Facebook from cartoonist Jay Stephens that he's kicked Marvel. Anyone else? Let's see: yep, it looks like the comics critic and founder of The Doug Wright Awards, Brad Mackay, has joined the boycott, a brave move for the father of a little girl who just discovered Kirby's classic run on the Fantastic Four and is clamoring for more. Good luck Brad!

Elsewhere, Brendan Wright writes a really wonderful essay on the case for Kirby and how heartened he is by the boycott in terms of restoring his faith in humanity. You should go read it!

"Which is the other reason we’re here. These companies will never do the right thing on their own. It will only happen if they suffer the right combination of bad press and the threat of a loss of profit large enough to make them blink. And that’s hard to accomplish, especially with a fandom that can’t imagine not buying the next issue of The Avengers or Superman, has never not bought the next issue, but it’s not impossible. It doesn’t have to be enormous. A movie doesn’t have to fail. It just needs to be the difference between a #1 weekend opening and a #2 weekend opening. What do we have to lose?

I don’t kid myself that there’s any bravery in not buying a comic book or not going to a movie. But something doesn’t have to be brave to matter. It just requires clear vision and a goal. If we want publishers to stop denying talent what they are owed, we need to make it clear that they have more to lose by doing the wrong thing than by doing the right thing."

And Tucker Stone, who writes some of the hardest-to-parse comics criticism around, especially in his weekly "Comics of the Weak" beatdown of the latest superhero comic books, has his regular harsh things to say about the latest Marvel offerings, with a few references to the "boycott Marvel" movement. I think Mr. Stone works in a comic shop, so he may not technically be buying these comics? Anyway, it's pretty funny as usual but you shouldn't read it if you like Squirrel Girl or if you are sensitive about the use of "bad language" in your reviews of Hellboy tie-ins and Marvel's Fear Itself miniseries.

Thanks for the continued updates.
Unfortunate that a person couldn't go to a place like the online "Jack Kirby Museum" to follow along, but sadly it's more a Marvel Museum than a Kirby Museum.

Not sure about the structure of the Kirby Museum and if the website team are able to comment publicly about ongoing legal or "moral" or "political" issues surrounding the Kirby Estate and heirs, as the case may be.