Just one link and one fun note tangentially related to the Marvel Boycott today:

The artist Michael Netzer has posted a long article about Jack's status as "King" Kirby that delves into the origin of the nickname and Stan Lee's role in the creation of both the Kirby Legend and Marvel's keystone comic book characters in general, all in the context of the litigation and boycott. Worth checking out, especially for Netzer's concluding sentence.

At the heart of the litigation to reclaim the rights to Marvel properties by the Kirby Estate is an issue of a moral injustice and personal humiliation that Marvel, aided by Stan Lee, tried to inflict on Jack Kirby because he dared ask that their promises to reward him, should his work help the company succeed, be fulfilled. It is painfully human and humane to understand the combative mode Kirby entered into during his latter years, which ultimately brought upon him the bitterness of betrayal that caused him to lash out in all directions. It’s a natural reaction for someone who trusted the people he worked with, and reacted with resentful emotion upon having that trust become so horrendously shattered. It becomes a much more understood reaction when seen in light of how Marvel tried to destroy Jack Kirby morally and in spirit, by attempting to turn him into the villain, when he was in effect their victim.

Now on to something a little less serious. I spent the past few days at a trade show where I picked up DC's Fall 2011 book catalog from their distributor Random House Canada (they also distribute Archie to bookstores, I think). It's fascinating to see how DC markets itself to traditional booksellers, selling their graphic novels and creators the same way other publishers market the latest mystery series or "great American novel". The thing is slightly different from the insider or fan-directed hype that is the stock-in-trade of Previews and DC's websites. Anyway, there are a few Kirby books scheduled for late-2011 release in the catalog, including Jack Kirby's Fourth World Omnibus, Vol. 1 --a 300 page, full-colour trade paperback (graphic novel) collecting the first part of his New Gods epic. The book design plays up Kirby's status by printing the author name first and in giant letters above the title. As I understand it, although Warner/DC owns the characters, they still pay royalties on these reprints as well as giving full credit to the creator. The opposite of the current Marvel situation. The biographical ad copy is worth quoting (emphasis added):

Jack "King" Kirby's comics career began in 1937 and continued for nearly six decades. With partner Joe Simon, Kirby first made his mark in the 1940s by drawing and/or creating numerous features for DC Comics including Captain America, the Young Allies, the Boy Commandos, Sandman, the Newsboy Legion and Manhunter. As the most valued team in comics, Simon and Kirby went on to create titles and concepts including Fighting American, Boys' Ranch and the creation of the romance comics genre. In 1961, the first issue of Marvel's Fantastic Four cemented Kirby's reputation as comics' preeminent creator, and a slew of famous titles followed that elevated him to legendary status, including Incredible Hulk, Avengers, and X-Men. Kirby returned to DC in 1971 with his classic "Fourth World Trilogy," which was followed by THE DEMON, OMAC and KAMANDI. Kirby continued working and innovating in comics until his death in 1994.

A very concise, if a trifle carefully-worded, capsule biography of The King, but I'm sure that Joe Simon would be surprised to hear he and Jack created Captain America for DC Comics! 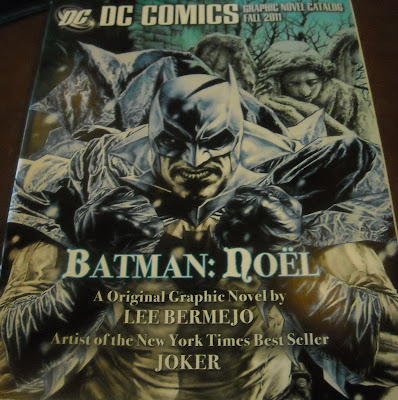 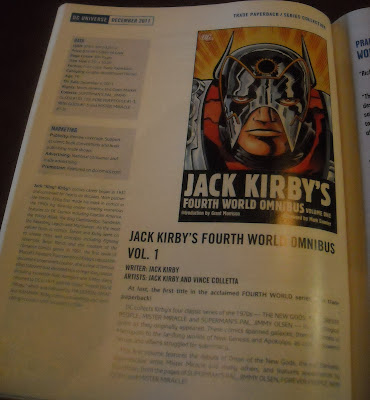 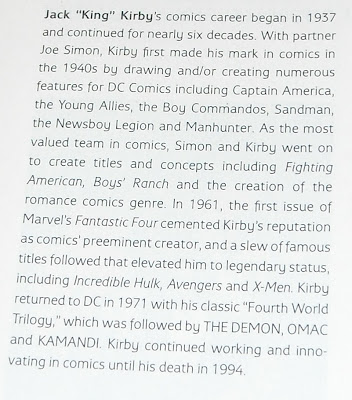 "As I understand it, although Warner/DC owns the characters, they still pay royalties on these reprints as well as giving full credit to the creator."

In the mid-1980s, when the Super Powers line was created and the Hunger Dogs graphic novel was being prepared, DC had Jack Kirby "re-design" the Fourth World characters for licensing so they could do a new contract giving Jack royalties and credit for any future use of the characters.
DC still owns the characters, but Kirby (and his estate) now benefit whenever there are new stories, reprints, action figures, movie/tv appearances, etc.
DC didn't have to do this, and their legal department was, in fact, against it.
But Jeanette Kahn, Paul Levitz, and several others in DC's upper editorial created this "work-around" on Kirby's behalf.

I've read about this before, the Kirby deal at DC. A classier arrangement than Marvel would have invented. DC has done similar things, after they were shamed into acknowledging and compensating Siegel and Shuster the floodgates of justice and compassion seem to have opened a bit. Plus, we can't ignore the propaganda effect of looking good next to the competition.